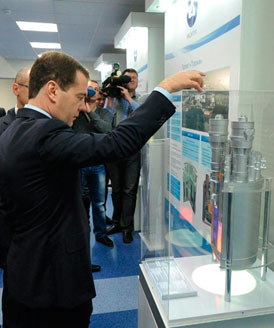 AKME-Engineering JSC is a joint state-private enterprise belonging in equal (50/50) shares to State Corporation “Rosatom” and energy and coal company “Irkutskenergo” JSC (subsidiary company of En+ Group). AKME-Engineering JSC was established in 2009 to develop a project, start serial productions and to perform commercialization of the reactor with lead-bismuth heat carrier on fast neutrons – a project called LBFR-100 (lead-bismuth fact reactor).

The LBFR-100 project is a part of the federal special-purpose program “Nuclear power technology of the next generation for 2010 – 2015 and up to 2020”. It is also one of the projects executed by the Council on economy modernization and innovation-driven growth of Russia as part of the program “New technology platform: close nuclear fuel cycle and reactors on fast neutrons”.

By now AKME-Engineering JSC is a certified operating organization, it has successfully held public hearings on disposition of pilot power unit with LBFR-100 in Dimitrovgrad. Besides, it has a certified quality management system, and a positive sanitary and epidemiological inspection report issued by Federal Medical and Biological Agency of Russia. AKME-Engineering JSC is also one of the enterprises approved to possess nuclear materials and reactor installations.

November, 20th, 2012, Novovoronezh: meeting of Council on economy modernization and innovation-driven growth of Russia, Dmitry Medvedev, Prime Minister of RF, is examining the model of LBFR-100 reactor installation at the exhibition.

The LBFR-100 reactor installation is made for regional nuclear power stations of low and medium capacity. Its characteristics show that it can also be used for power supply of remote regions, in countries with limited power demand or without sufficient funds to build a nuclear power station og high capacity.