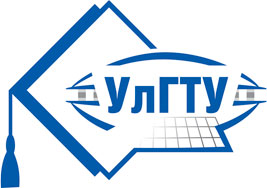 Ulyanovsk State Technical University (USTU) is one of the leading scientific, educational and cultural centers of the Volga region. It was established in 1957 and till 1994 was called “Polytechnical institute”.

USTU on a regular basis takes its place among top ten of 50 regional universities. It has all the students need to get modern education meeting both the state educational standards and the requirement of employers. More than 600 teachers work at USTU, 60 of them are PhD Professors, nearly 340 Associate PhD Professors, more than 50 members and corresponding members of specific academies. Nowadays the total number of UlSTU students amounts to 16,000.

USTU departments are as follows:

USTU is a unique center of inventive works in Russia. It ranks 2nd in the number of patents among all Russian legal patent holders. By January, 1st, 2011, USTU had obtained 3994 titles of protection of intellectual property, among them: 3054 – on patents, 558 – on utility models, 6 – on industrial samples, 361 – on computer programs, 14 – on data bases, 1 – on trademarks.

Every year university staff publish more than 2,000 articles in scientific magazines and collections of scientific papers, take part in Russian and foreign scientific conferences with more than 1,600 reports.

USTU is a reference center of Federal Institute of Industrial Property in Ulyanovsk region, as well as of Russian Business and Innovation Networks, Russian Technology Transfer Networks, National Association of Innovations and IT development, Transfer Technology Center of Belarus, Enterprise Europe Network, and other organizations. Ulyanovsk Technology Transfer Center has been created on the basis of USTU. Now it successfully provides a wide range of services in the sphere of intellectual property protection and technologies commercializing, of investment attraction at the outset of technology development, as well as of international scientific and technological cooperation.

E-mail: This email address is being protected from spambots. You need JavaScript enabled to view it.