Creating the production of the drug Molybdenum-99 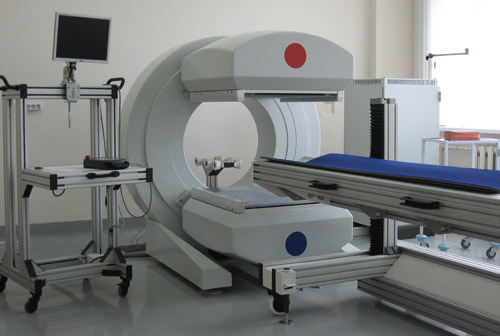 The project is realized by SRC Atomic Reactor Research Institute under the instruction of the Russian Government No. 2092-r dtd December, 29th, 2009.

The aim of the project is to create in Russia its own production of new radioactive pharmaceuticals and medical products, and to organize a system of hi-tech medical aid to the population of the country.

Near 80% of all the activities in nuclear medicine depends on the supplies of Mo-99, a radioactive nuclide of medical purpose used to produce the source of Tc-99m -  a main  diagnostic radioactive nuclide of modern nuclear medicine. Nowadays Tc-99m helps to identify a big number of human diseases, mainly oncologic and cardiovascular ones. The number of such diagnostic procedures is more than 25 mln. per year.

When U-235 is radiated by thermal neutrons in nuclear reactor, its core is divided into many pieces, i.e. isotopes. As a result of such radiochemical reaction isotope Мо99 is created. Isotope Mo99 with half-time period of 66 hours turns into isotope Tc99m. In medical institutions the liquid with Tc99m is inserted into a human body, and the gamma radiation of the isotope helps to diagnose numerous diseases, including cancer. To increase the selectability of technecium distribution in a human body, and thus, to decrease the human radiation load, the chemical reagent sets are used. These are the compounds facilitating the concentration of technecium in a radiated body part.

By now the SRC Atomic Reactor Research Institute experts have mounted the main technological equipment, and have launched the 1st and 2nd production stages of pilot operation of Mo99 radioactive nuclide. The final product is supplied mainly to the Russian customers, though test batches of Mo99 have started to be delivered to external markets as well.